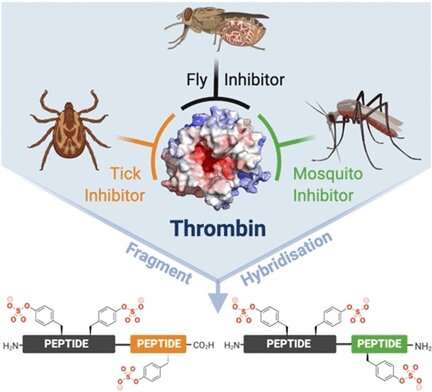 Thrombosis, the clogging of blood vessels, is a major cause of heart attacks and embolisms. Scientists have now developed the first inhibitors of thrombin, a protease that promotes thrombosis and has a triple effect. In a study published in the journal Angewandte Chemie, the authors show that attacking three sites on the thrombin molecule is more efficient than attacking only two sites, which is the mode of action of many natural drugs.

Soon after an injury, thrombin appears at the wound site and promotes platelet clotting and fibrin development to plug the wound and grow new tissue. Unfortunately, uncontrolled thrombin activity in blood vessels can lead to clogged pathways that are fatal for patients. Thrombosis recently came into focus when it was found to be one of the major complications of severe COVID-19.

Many biting and blood-sucking insects carry natural antithrombotic factors to keep the blood in wound fluid. Some of these natural inhibitors have been turned into drugs. The most commonly used thrombin inhibitor is hirudin, a peptide isolated from leeches.

In their endeavors to optimize thrombin inhibition, Richard J. Payne from the University of Sydney, Australia, worked with an international team of scientists to investigate the mode of action of the inhibitors. Most insect thrombin inhibitors block two sites on thrombin. Usually they attack the active site (the substrate cleavage center) as well as one of two other regions on the surface of the enzyme that are important in regulating clotting.

To cover all three spots with a drug, the researchers chose three natural inhibitors that were then patched together. They combined the tsetse thrombin inhibitor or TTI from the tsetse fly with either an inhibitor peptide called variegin from a tropical tick or the inhibitor anophelin from the malaria mosquito Anopheles. The resulting hybrid peptides were designed to span all three binding sites of thrombin.

This design turned out to be efficient. According to the authors, the “constructs from both hybrid series showed exceptionally strong thrombin-inhibiting activities”. The scientists reported an up to 385-fold inhibition of the hybrid, in which the peptides of the tsetse fly and the anopheles mosquito were involved. With the other hybrids, the improvements were two to ten times. All hybrids inhibited thrombin generation and platelet aggregation, particularly in human plasma.

To test the constructs in a living body, the researchers used one of the hybrids on a mouse model. Here it shrunk a thrombus with at least the same efficiency as hirudin and reduced fibrin accumulation. The authors hope that this work not only leads to effective anticoagulant drugs, but also helps in the design of other peptide-based drugs.

Quote: Potent trivalent inhibitors of thrombin from anticoagulation peptides in the saliva of insects (2021, January 29), accessed on February 5, 2021 from https://phys.org/news/2021-01-potent-trivalent-inhibitors-thrombin-anticoagulation .html