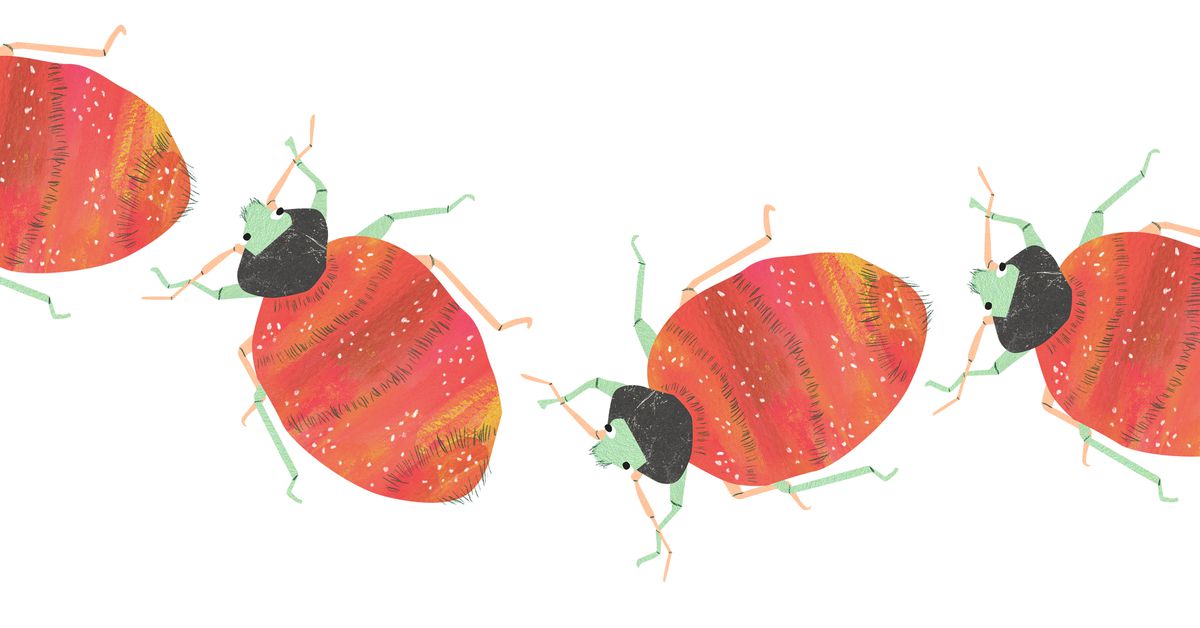 A bedbug odyssey begins with rejection. An ankle fault could be anything: a mosquito bite, irritation from a sandal closure. Even two could be harmless. But three in a row – that was harder to refute. Then I caught one that crossed our covers in broad daylight. I nudged it into a sealable container and later, panicking and irrationally, tossed the entire container away. We had bed bugs.

We pursued them to our neighbors on the first floor, who got them first and tried to self-medicate with an insect bomb. Their bugs fled into the walls, migrated up to the nearest heat source, and became our bugs. For my friend, a native of New York, it was the culmination of a life of paranoia. “It finally happened,” he kept saying. His constant vigilance – he turned down used furniture and never sat on a subway bench – hadn’t protected him, and he felt betrayed.

The treatment started with the bed. We bought a mattress cover (expensive, like anything related to bug treatment) to seal the bugs inside, where they would eventually starve and die. We emptied the closet and pulled out most of the furniture. So our bedroom: empty and echoing, with the bed in the middle, littered with trapped beetles.

When you have bedbugs, your first impulse is to pick up and move – to a hotel for the night, to a new apartment, to a Montana ranch to start a new life – but this is the last thing you should do . It is best to stay in place and keep your things focused to minimize the spread. So you sleep on a bed you distrust, in an apartment you distrust, over neighbors you swore vengeance on.

For my friend, a native of New York, it was the culmination of a life of paranoia. “It finally happened,” he kept saying. His constant vigilance – he turned down used furniture and never sat on a subway bench – hadn’t protected him, and he felt betrayed.

A house in bedbug treatment transforms. We sealed our clothes in contractor bags and piled them high in the living room. Bags, belts, shoes, curtains, carpets: anything soft was suspect. I vowed that in the future everything I bought would be hard and sterile and completely porous. Some items could be washed and dried in high heat, but precious things, boots and beloved leather jackets and delicate clothes were carried away by the man from the heat treatment facility with the sympathy and discretion of an undertaker. After the treatment, our clothes lived in clear plastic bags that lined the perimeter of our home. We fished our outfits out of our pockets, our shoes out of plastic containers. We dressed in the living room, where there was no mirror. I once went to work with a button-down blouse inside out.

We sucked – we never didn’t suck – and washed and sprayed and threw away more than we probably had to. It took months, but the Annihilator finally fixed us. The bugs were gone; We could live like humans again. We carefully refilled the cupboards. I started to joke. “Not funny yet,” my friend told me.

A year passed. We got engaged. “It’s been a stressful year,” we said. “We wanted to do something joyful.”

Then we have bedbugs again.

If the first time felt like a tragedy, the second time was a farce. It was too stupid that we had her again exactly a year after the first time. Where could they have come from? An unproductive question that we asked anyway. The annihilator rattled off options: an Uber, a hotel, a movie theater, an airplane, an office, a friend’s apartment. The real question: where in New York can’t you get bugs? After about an hour of silent horror, we laughed and started again. We packed up our clothes and called the man from the heat treatment plant – “I’m so sorry,” he said, so seriously that we started laughing all over again.

People would ask innocuous questions: When is the wedding date? Did you start planning? The answer that our all-consuming priority was killing insects was too ridiculous to be given. “How is life engaged?” a friend wrote a text message. I peered around the mountain of bags where my fiancé was sucking with a blank face. “Pretty great,” I replied. What else could i say

I thought engagement might feel like our transition into real adulthood, a future of shared bank accounts and life insurance, and the strong possibility that someone would finally give us a Roomba. Instead, we relived last year’s problems with last year’s characters: the exterminator, the heat handler, our stratified management company. We couldn’t leave the apartment or throw the mattress. Everything was the same, so we would have to be different. We’d have to rise to pretty grand.

Pretty well required a different approach. The first time we got bugs, we stumbled from task to task trying to get things back to normal. This time we wouldn’t try to do it all at once and we would watch out for burnout. We exchanged ideas: If I felt particularly confident about the error situation, I could be the one to hold more vacuum filters or shoulder a different load to the basement laundry. He was allowed to step into the closet (it was empty after all) and scream.

We were able to communicate better, but we also learned not to say anything. He was tactfully silent while I compulsively changed the sheets; I didn’t mention the number of times he emailed the destroyer. We didn’t question the merits of these coping methods (because we were too tired), but neither were we drawn into them (because we were too tired). “Do it!” We would code each other for “You have my support, but I’m going to take a nap.”

I vowed that in the future everything I bought would be hard and sterile and completely porous.

This attitude extended to the apartment. We have made peace with our mountain of plastic containers and bags. Once the bugs were gone, it didn’t seem right to reset everything.

We got engaged to mark a transition, but it was the second time the bugs forced us to make real changes. For years we have postponed moving homes, discouraged by the investment and hassle of moving. Now it seemed urgent (logical or not, we could no longer trust this apartment) and even simple – after all, most of our things were already packed. We also had to rethink our bedroom. Even in the days leading up to the bow, it was an afterthought – a mess of half office and half bedroom, our best furniture and artwork reserved for other rooms. After losing one bedroom as a haven, we gave the next a little more respect. From then on it was easy to imagine other seismic changes, like leaving New York altogether.

Did the bugs chase us out of town? Maybe, but we were ready to go. New jobs, a new city: this was the transition we had to make. The wedding could wait.

One day we’ll figure out how to get married – maybe in a park or a winery or a hotel full of family and friends, or maybe just the two of us, hand in hand in the courthouse, cozy (huh?) Already funny?) As two little bugs .

Tina Morgan is a Portland-based writer with a day job at the brand.