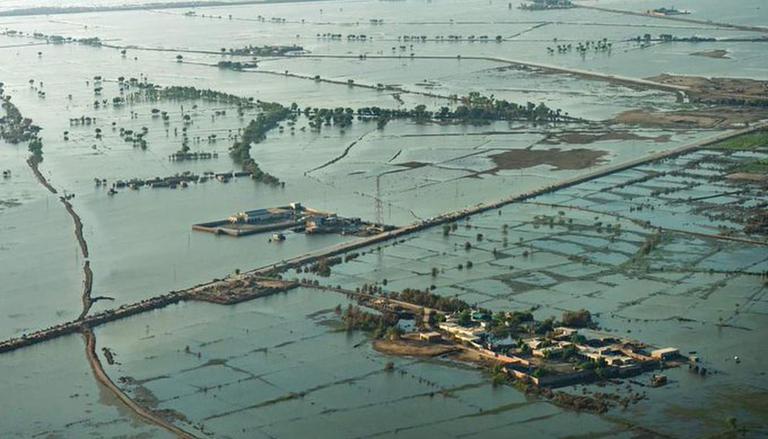 Since the authorities have done nothing to pump the standing water off the streets, citizens are bearing the brunt of the authorities’ indifference. The financial brunt of these floods is estimated at about $30 billion. Pakistan’s floods in Jamshoro and Dadu districts of Sindh have been infested with termites and are proving disastrous for the people.

According to the official Twitter account of Pakistan’s largest private network of automated weather stations and weather source, “The aerial view of the region between Upper #Sindh and #Baluchistan is still under widespread #flooding despite two months. Dated October 17, 2022. Credits: Hydaspes Lightbox #PakWeather #FloodsInPakistan2022 #FloodsInPakistan #Monsoon.”

1 in 9 children suffer from malnutrition: UNICEF

The termite attack in Pakistan has caused severe damage to wooden doors, windows and other furniture. The dire situation entails a risk of economic loss in the millions and enormous damage to the infrastructure. To prevent further damage from flooding in Pakistan, local residents have urged authorities to spray the affected area with repellents.

UNICEF said health facilities are reporting alarming levels of severe malnutrition following the devastating floods in Pakistan. More than 1 in 9 children under the age of five were admitted to health facilities in the flood-hit areas of Balochistan and Sindh and suffered from malnutrition.

In a statement, UNICEF said: “In total, out of over 22,000 children screened by health workers at health facilities in flood-affected regions since September 2022, more than 2,630 have been diagnosed with severe acute malnutrition, also known as a severe wasting condition , in which children are too thin for their height, leading to a weakened immune system.”

According to reports from the National Nutrition Survey conducted before the floods, about 1.6 million children in the flood-hit provinces of Sindh and Balochistan may be suffering from malnutrition. Several pregnant women are at risk of giving birth to malnourished, underweight babies.

UNICEF Representative in Pakistan Abdullah Fadil said: “We cannot sound the alarm loud enough. We are facing a food emergency that is threatening the lives of millions of children. Without urgent action, we are heading for a catastrophe that threatens child development and survival. We’re delighted with the support of the global community so far, but much more is needed to say the lives of children. Several waterborne diseases such as dengue, malaria and other respiratory diseases are on the rise in Pakistan.

With input from ANI

Metropolis Council strikes to place the kibosh on rodents with passage...

Insectta, a Singapore startup, is utilizing bugs to show trash into...