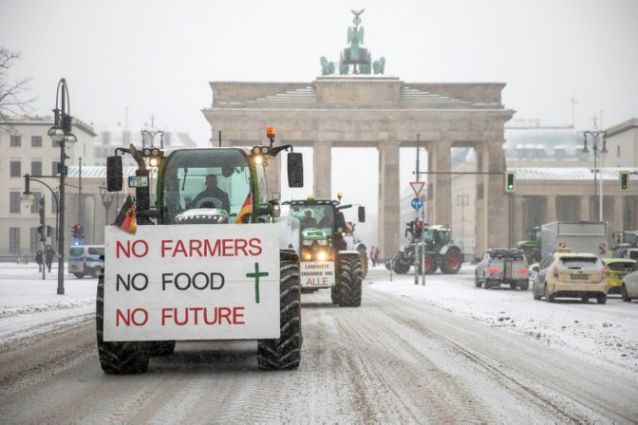 The federal government on Wednesday proposed laws to halt a dramatic decline in insect populations, but immediately drew fires from farmers who said the new measures threaten their livelihoods.

The “Insect Protection Act”, which is supposed to restrict the use of pesticides, is the result of two years of dispute within the coalition government of Chancellor Angela Merkel.

Hundreds of farmers drove their tractors to central Berlin this week to protest against the legislation that has yet to go through parliament.

“No farmers, no food, no future,” read a sign on a tractor that demonstrated on Tuesday near Berlin’s Brandenburg Gate.

The flagship of the policy package is the phasing out of the controversial weed killer glyphosate by the end of 2023.

It also bans the use of herbicides and insecticides in national parks and contains rules to reduce light pollution at night.

“People cannot live without insects,” said Environment Minister Svenja Schulze, calling the law “good news for insects and the future of our ecosystems”.

Legislation also restricts the use of pesticides near major bodies of water, but the final version of the text leaves it to the individual federal states to set detailed requirements.

Agriculture Minister Julia Kloeckner said some plants grown in protected areas would be exempted from the stricter regulations and there would be exemptions for vineyards.

The President of the German Farmers’ Association (DBV), Joachim Rukwied, described the plans as “short-sighted” and a “bad signal for cooperation between the agricultural industry and nature conservationists”.

“The legislation poses an existential risk for many farming families,” he said.

“Every kilo of pesticide saved, every square kilometer of pesticide-free land and every saved light source are positive for insects and nature,” it said in a statement.

A 2017 study in Germany was one of the first to raise global alarms about the loss of insects.

It turned out that the biomass of flying insects in German nature reserves had declined by more than 75 percent in 27 years, which triggered warnings of an “ecological apocalypse”.

The gap between farmers and environmentalists has widened in recent years in Europe’s top economy, where nature conservation is high on the political agenda, partly triggered by the future strikes on Friday.

The change in public sentiment has led Merkel’s government to advocate animal welfare, leading to recent pledges to stop culling male chicks and end the practice of neutering piglets without anesthetics.

However, farmers complain that they will have to bear the cost of the new measures and that the stricter regulations do not allow them to compete with cheaper agricultural products from abroad.

The German Farmers’ Association estimates that the planned legislation could reduce the available agricultural land by seven percent.

Measures based on incentives rather than bans have been called for.

Agriculture Minister Kloeckner on Wednesday promised “financial support” and compensation for the farmers affected by the insect protection plans, without giving detailed figures.

She also said the government would co-fund the purchase of so-called precision farming equipment, which can be used to more accurately distribute fertilizers and pesticides, reducing the amount used.

Michelle FITZPATRICK submitted this piece for AFP from Frankfurt am Main

How a British Gardening Present Bought Folks By means of the...

East Africa desires to be the world’s insect protein hub —...