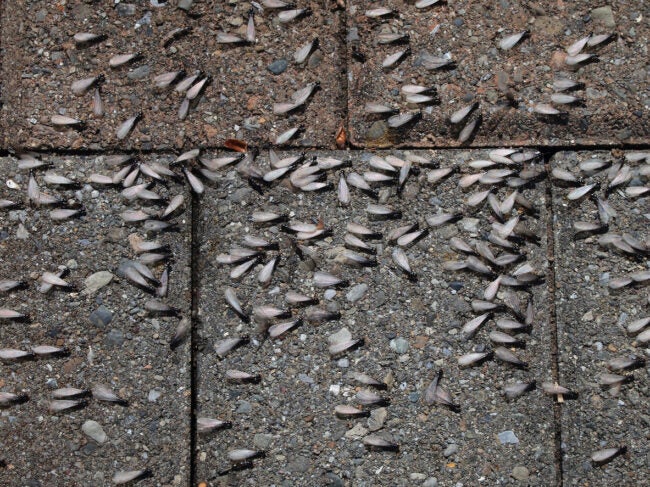 Q: I have seen some small bugs near the baseboards of my house along with some small holes in the wood. I’m worried it might be termites, but I’ve never seen them in my house before, so I’m not sure what termites look like. Are there any bugs that look like termites, or should I hire an exterminator ASAP?

A: Termites are a homeowner’s worst nightmare — they can cause thousands of dollars in damage to your home’s structure before you even know they’re there. But homeowners don’t have to worry immediately when they spot small bugs in the house. Many insects can resemble termites or display similar behaviors, and while some pests may need the help of an exterminator to remove them, others are harmless. If you’re concerned about the presence of termites in your home, read on to learn about some of termite lookalikes (and see the difference between termites and ants) and how to identify termites when they do actually exist in your home.

Termites can look different, but they leave telltale signs of their presence in a home.

There are about 45 species of termites in the US, which means not every termite looks exactly the same. These species fall into one of three categories: underground termites, wetwood termites, and drywood termites. Termites are generally between ¼ and ½ inches long with rounded bodies that lack a defined waist and have short antennae. Body color ranges from cream to reddish brown. When a homeowner sees white bugs that look like termites, they are most likely termites, as few other insects of a similar shape and size can be as bright. Signs of termites include dead winged insects in the house, hollow-sounding wood, unexpected sawdust, or windows that are difficult to open.

Flying ants can be confused with termites because both insects fly.

When a homeowner spots termites, they often see the winged termites leaving the original colony to start a new one, meaning the original colony has become overcrowded and signaling a serious infestation. These winged termites are the ones that can mate and reproduce. When homeowners spot bugs that look like flying termites, they often see them in swarms. Flying ants move in swarm patterns similar to termites, so it can be natural to confuse the two insects.

The most important difference between flying ants and termites is that unlike termites that feed on wood, flying ants do no harm. A termite infestation is accompanied by small piles of sawdust on surfaces or visible holes where termites have dug themselves.

However, flying ants can still cause an infestation, and like typical ants you would see in or around the home, flying ants are attracted to food and leftovers. When ants that look like termites are spotted but nibbling on bits of food left in a pet’s food bowl, it’s a sure sign that the insect is a flying ant. Cleaning up food and trash or setting traps can deter flying ants from infesting a home.

Find licensed pest control professionals in your area and get free, no-obligation estimates for your project.

Carpenter ants are black bugs that look like termites and damage wood.

Many homeowners can confuse a carpenter ant infestation with a termite infestation because both tiny pests poke holes in wood and destroy it. Carpenter ants can leave small piles of wood debris known as frass, but often a homeowner is unlikely to spot frass. Frass is stored in the wood cavity rather than on the floor or window sill where sawdust produced by termites would be seen. Carpenter ant holes are also smoother than termite holes – as if they were ground or drilled. Termite holes are rougher and look clearly “chewed”. 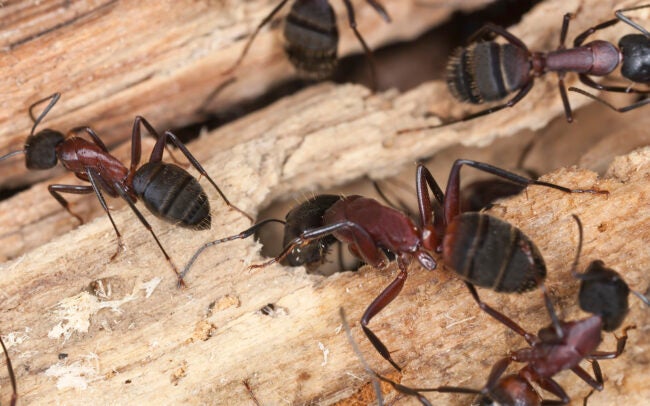 If a homeowner has previously dealt with a termite infestation and now discovers insects in the holes and gaps left by the termites, they may think you have another termite infestation on your hands. But these insects that look like termites could be acrobatic ants. This species of ant often settles where termites have been abandoned or eradicated. Acrobat ants may leave tiny pieces of wood or insulation behind, but usually cause less damage than termites. Like carpenter and flying ants, they have narrower centers than termites and also have curved antennae.

Acrobat ants get their name from their physical responses when disturbed: they stand upside down with their stomachs and legs in the air. These insects can also emit a foul odor when disturbed, which can help distinguish them from other species of ants or termites.

The holes that carpenter bees create can look like termite kick-out holes. 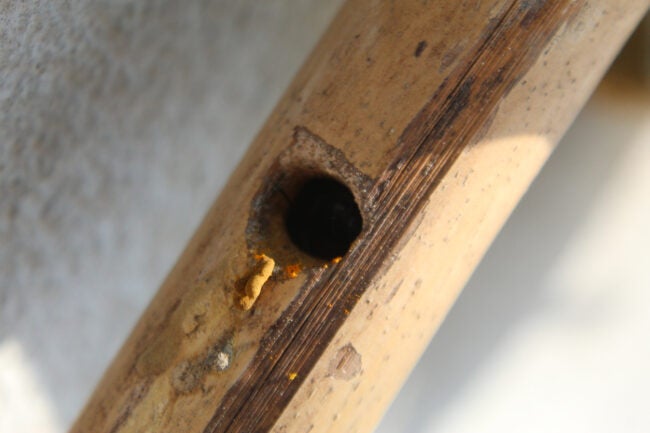 If you see bugs that look like termites without wings, they could be dust beetles.

A powder beetle is a bug that looks like a giant termite. It’s another wood-boring insect, but it only eats untreated wood, while termites aren’t as picky. Powder beetles only come out at night, so you’re more likely to see the remains of the beetle’s work than a beetle itself. Dust beetles leave pinpoint-sized holes surrounded by fine sawdust. The body shape is different than that of a termite – dust beetles have a typical elliptical beetle shape. If a homeowner thinks they have dust beetles, it’s still worth calling an exterminator to minimize the damage these insects cause.

Mayflies and lacewings are beetles that look like termites with wings and also swarm.

Carpenters and flying ants aren’t the only winged bugs that might be mistaken for termites. Mayflies and lacewings are two other small bugs that look like termites with wings. When these bugs are stationary, it should be fairly easy to tell them apart from termites. However, all three of these bugs are swarming, so it’s hard to tell at a glance when these bugs are on the move. 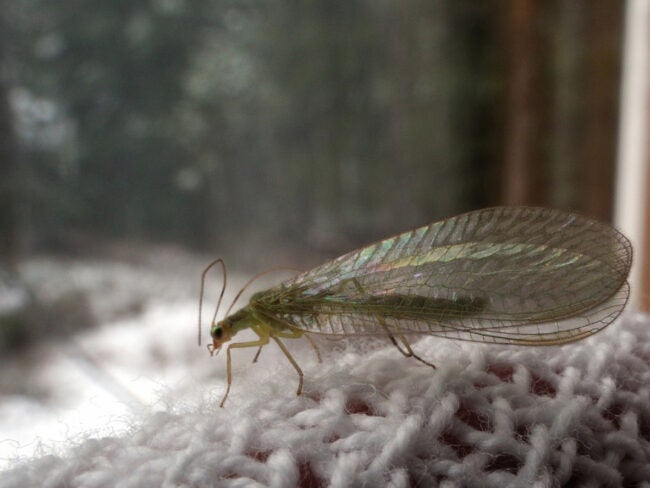 Mayflies spend most of their lives evolving in freshwater bodies, so they are common pests around rivers, lakes, marshes, or marshes. Like winged termites, mayflies swarm, so a homeowner might think you have a termite infestation on your hands when they see lots of little flying bugs in your yard. Adult mayflies are larger than termites (up to an inch long). Mayflies also have a distinctive shape with a long and thin abdomen and two or three thin tails coming out of the end. Mayflies don’t bite or sting, so the only harm they do is a nuisance.

Green lacewings are backyard bugs that are very useful to anyone with a garden. These insects feed on pests such as aphids, spider mites, and mealybugs. While lacewings are light green in color during the warmer months, they turn brown during the winter. The brown color in combination with four equally long wings makes green lacewings even more reminiscent of flying termites. However, green lacewings also have longer antennae and almost transparent wings, while termites have shorter antennae and more opaque wings.

When in doubt, it’s a good idea to have a termite inspection done.

Termites are no joke and can cause serious and permanent damage to a home. Rather than poring over a termite identification chart or asking friends or neighbors for advice, it’s always a safe bet to hire a professional for a thorough termite inspection if there are any questions as to whether these insects have made their way into a home. The best termite control companies can detect an infestation and apply the best termite treatments to effectively eradicate the population.

Find licensed pest control professionals in your area and get free, no-obligation estimates for your project.

Donations sought to save lots of 1920s clubhouse in Sarasota from...

‘I discovered termites after transferring in’: Eight potential pink flags you...