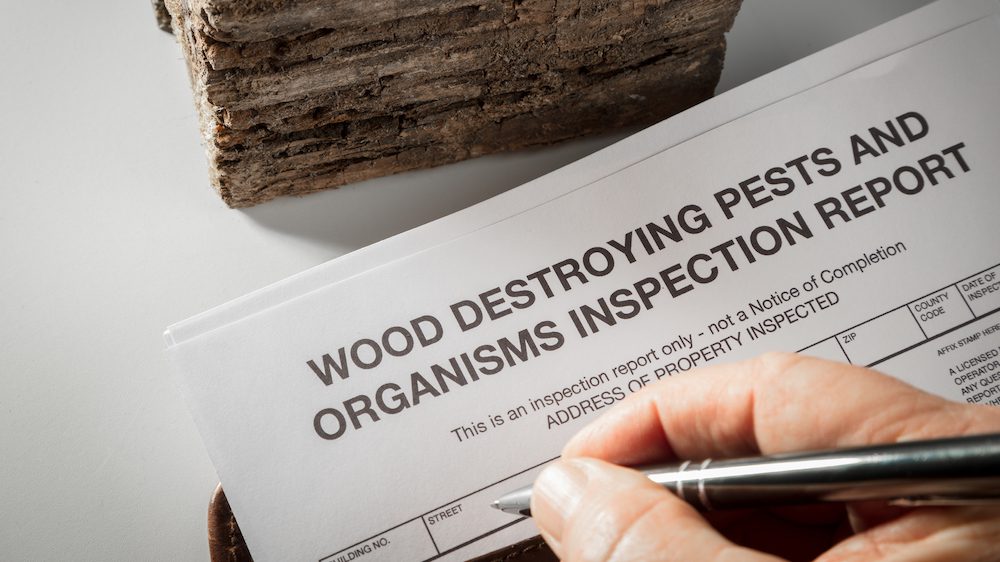 You have finally found your ideal home and you are on your way to becoming a homeowner. However, before the sale is complete, there are a few hurdles you need to overcome, one of which can be a termite inspection. While few states require this – and there’s no federal law requiring a termite inspection when buying a home – you should think twice before skipping over it.

“Termites are commonly known as ‘silent destroyers’ for good reason,” says Dr. Jim Fredericks, Chief Entomologist for the National Pest Management Association. “These voracious pests can cause serious damage and compromise the structural integrity of a home while hidden within the walls and foundations of a home.”

It makes sense to be proactive about protecting your assets – especially when it comes to house infestations or major structural issues.

If you’re still not sure whether or not you need a termite inspection, here are some great reasons you should probably make an appointment with a pest control company.

1. Your lender can request it

If you buy your home through a mortgage lender, a termite clearance letter may be required, stating that a pest control company has examined the property for termites and has found no evidence of infestation or damage.

“Termite inspections can be a lender requirement depending on the area you live in and if the results of your home valuation or inspection show evidence of infestation or deterioration,” said Jason Bates, vice president of purchase for the mortgage loan company American fundingin Aurora, CO.

Government-sponsored loans, such as Federal Housing Administration and Veterans Affairs loans, typically require a term inspection. According to Fredericks, these loans require inspection of wood-destroying insects, although this is common practice in the area and required by the state or local jurisdiction.

“Because many private lenders seek advice from the Department of Housing and Urban Development (FHA), lenders in regions of the US with high termite activity often require a WDI inspection as well,” says Fredericks.

He says a WDI inspection includes a careful visual inspection for signs of wood-destroying insects, including termites, beetles, carpenter bees, and carpenter ants.

2. Termites can be active even when you can’t see them

Here’s a worrying fact: termites can exist for up to five years before the colonies are large enough to cause real damage. Ouch!

“Termites like to do an inside job, they are rarely seen – only when they send out hawks who are winged reproductive forces that go out and start new colonies,” he says Raymond Web, Online Marketing Manager, Take Care Termite & Pest Control in Tracy, CA.

According to Bates, termite damage usually begins and spreads in areas where wood-soil contact is made. Over time, termites can damage the integrity of the structure and, in extreme cases, require a complete demolition.

“Termites are active year round because colonies that provide shelter in the foundation or walls of a house are somewhat protected from the cold outside temperatures,” says Fredericks. “While these intruders can easily be hidden from homeowners, a professional inspection can help reveal termite activity that is taking place behind the walls.”

He says it is good practice to have a professional termite inspection carried out on your home each year to identify an infestation early on.

3. Homeowners insurance usually does not cover these

If you have a termite problem in your home, your homeowner’s insurance most likely does not cover termite damage or removal.

“Most homeowner insurance only covers termite damage if there is an additional insurance plan or driver, similar to flood insurance,” says Bates.

Fredericks says that since most homeowner insurance policies don’t cover this, homeowners should identify termite infestations early to reduce the likelihood of extensive damage developing.

“The longer termites actively feed on and damage the wooden parts of a house, the more extensive and expensive the repair process can be,” says Fredericks.

Orkin says US residents spend an estimated $ 5 billion annually on controlling termites and repairing termite damage. A homeowner who discovers termite damage spends an average of $ 3,000 to repair the damage.

“Termite treatment costs vary, but can be up to $ 20 per linear foot with low infestations. If a structure is infested, the cost of treating it can be thousands, plus the cost of repairing the damage, ”says Bates.

Calling an inspector to check your home will not cost that much money (around $ 100) and will save you headaches later. Fredericks says termites, while small, live in colonies of up to two million and eat wood to get the cellulose and nutrients needed to survive.

“If this option is not checked, termites can cause widespread and costly damage over time, which is why annual professional termite inspections are so important,” says Fredericks.

What pests and bugs to look out for this summer season

Greater than 1,000 rodents killed in hearth at Westman Reptile Gardens

Termites will help out in a drought | A Second of...

Aged Termites Are Despatched Into Battle to Die First